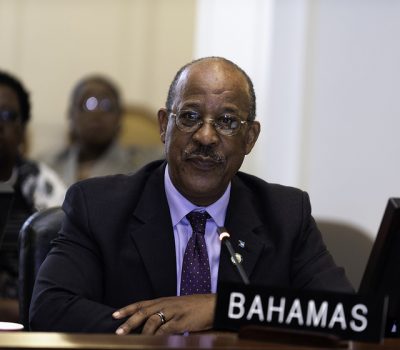 Ambassador Collie, OUE Board Chairman, speaks during the International Day of Remembrance

His Excellency Sidney Collie, Bahamas Ambassador to the United States and Permanent Representative to the Organization of American States (OAS), serves as the Board Chairman of the Obokese University of Excellence. Ambassador Collie recently gave a speech on the importance of remembering, honoring, and addressing the unique issues of African people all over the world.

Below is his speech:

Thank you, Madame Chair. I want to thank the coordinator of the CARICOM CAUCUS, His Excellency Philip Spencer for asking me to present the CARICOM Statement on the Commemoration of the International Day of Remembrance of the Victims of Slavery and the Transatlantic Slave Trade.

I believe he has done so because of my visit to Ghana in November 2020, on the invitation of the President of Ghana, The Hon. Nana Akufo – Addo and His Royal Highness Professor Okatakyi VII, King of the Asebu Traditional Area, where I was installed as Development Chief of the entire twenty-six regions of the Asebu Kingdom, in Ghana. This helps facilitate one of the Year of Return Legacy events.

An Awesome Responsibility and the first such honor being awarded to a member of the African Diaspora. My new chieftain title is Nana Kwasi Obotan I (which means A Solid Rock).

Madame Chair. The member states of CARICOM thank the Office of the Assistant Secretary General for its commitment and dedication in ensuring that we appropriately remember the victims of the horrific transatlantic slave trade through this week of activities, from March 22, 2021. We also express our appreciation to today’s presenters, in particular, our own Dr. Kambon, for their moving and poignant words.

Chair, CARICOM member states are intimately aware of the legacy of the transatlantic slave trade, having been destination countries for millions of enchained Africans. The driving force of the transatlantic slave trade was the need for labour in the “New World”, resulting in the forced removal of more than 4 times the number of the 17 million Africans who arrived in chains in the Americas.

Stripped of their culture, their families and their dignity, African men, women, boys and girls, were utilized as cheap sources of labour for hundreds of years. While they reaped the benefits of this barbaric trade, colonizers also advanced the concept of race to justify the enslavement of Africans, thereby seeking to denigrate and dominate them. Today, the legacy of slavery lingers on through structures, systems and strategies that were developed to pursue an agenda of racial discrimination.

As we contemplate the theme of this year’s commemoration, “Ending slavery’s legacy of racism: The imperative for strengthening justice and resilience in Afro-descendant communities in the Americas in the face of COVID-19”, it is important that we not only remember the victims of slavery but also address the lingering impact of this shameful act on people of African descent. For years, afro-descendant communities were marginalized and denied equal access to jobs, remuneration, health care, education, housing, food and other basic human rights, as a result of the negative racial stereotypes perpetuated through political, social, and economic systems and institutions.

Despite measures to address the unequal treatment of Afro-descendants, the challenge of systemic racism persists, which the COVID-19 pandemic has magnified. In its January 2021 COVID-19 Report titled “People of African Descent and COVID-19: Unveiling Structural Inequalities in Latin America”, the United Nations Economic Commission for Latin America and the Caribbean (ECLAC) reported that “COVID-19 is exposing social inequalities of all kinds, as well as the overrepresentation of Afro-descendants among the group living in poverty who are employed in informal and caregiving jobs”. The study notes that several agencies and institutions, including the Pan American Health Organization (PAHO/WHO, 2020), have highlighted that the Afro-descendent population is more vulnerable to COVID-19 owing to the structural inequality and racial discrimination to which it is subjected.

Chair, the Caribbean Community has not been silent or inactive on the matter of justice for Afro-descendants and has been advocating for reparative justice for a number of years. Most notably, in 2013 CARICOM Heads of Governments established the CARICOM Reparations Commission (CRC).

This Commission is mandated to prepare the case for reparatory justice for the region’s indigenous and African descendant communities, who are the victims of Crimes against Humanity (CAH) in the forms of genocide, slavery, slave trading, and racial apartheid. Even before the establishment of the CRC, Surinamese Hero – Anton de Kom and, renowned politicians and scholars from the Caribbean, such as Dr. Eric Williams, former and first Prime Minister of Trinidad and Tobago, and Sir Arthur Lewis, St. Lucian economist and Nobel Laureate for Economic Sciences, set the foundations for focused attention and action to bring justice to the descendants of enslaved Africans through their published works.

Despite the challenges faced by persons of African descent in our region, their resilient spirit remains strong and enduring. Even after the ravages and brutality of the transatlantic slave trade, our ancestors persevered and became leaders in the fields of science and technology, medicine, academia, politics, sport, and the arts. Beginning with the Haitian Revolution, which was the catalyst to that country’s independence in 1804 and paved the way for the eventual abolition of slavery, to the Civil Rights movement during the 1950s and 60s, and today’s Black Lives Matter campaign, calls for justice and the equal treatment of people of African descent are heard throughout the world.

Chair, we will not turn a blind eye to the real systemic and structural inequalities that people of colour face, particularly during this pandemic. CARICOM member states reiterate our call for the equitable distribution of COVID-19 vaccines so that we can save the lives of those most vulnerable to the virus and begin the process of rebuilding and revitalising our economies. We stand in solidarity, to end slavery’s legacy of racism and inequality, and to create a better more equal world for our future generations. Thank you.