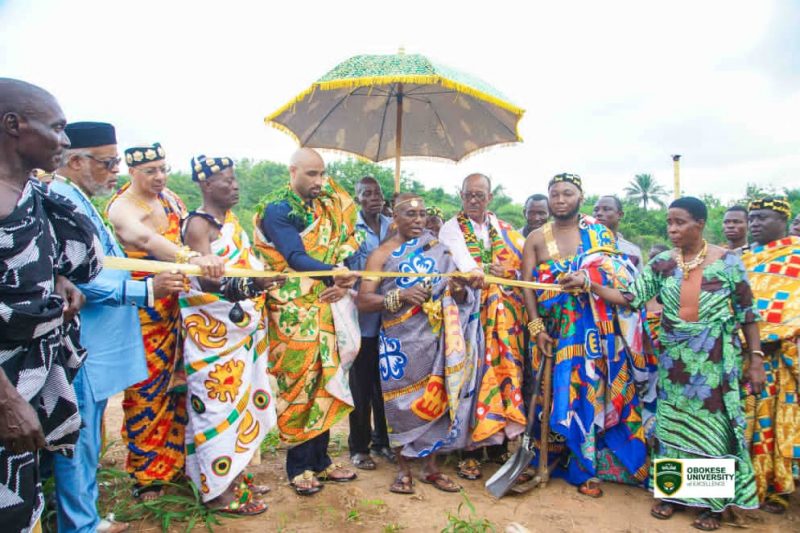 Cheyney University, a Private University in Pennsylvania has partnered with Wakanda One Obokese University of Excellence, a private Institution base at Asebu Kingdom in the Central Region to establish an aquaculture campus aimed to start tilapia fish farming and other aquaculture programs in Ghana.

The Cheyney and Oboseke University of Excellence (OUE) has reached an agreement on a partnership that will include knowledge sharing and permit both schools to establish a student exchange program.

Under the agreement, Cheyney Univesity will share its expertise in aquaculture and aquaponics, a food production system that combines raising aquatic animals with cultivating plants in water.
The agreement marks the first time that Cheyney, has partnered with an international African university in its 184-year history.

The partnership with the soon-to-be-built Oboseke University of Excellence in the Asebu Kingdom is Cheyney’s first international collaboration with another school.

It’s one of several partnerships that Cheyney has begun cultivating in the last few years to strengthen the university and enrich education for students.

Oboseke University of Excellence (OUE) as gathered will offer resources to Cheyney on its campus, including land projects that will benefit both schools, whereas Cheyney, which has an Aquaculture Research and Education Laboratory, grows tilapia on campus and the waste generated fertilizes basil that is sold to local grocery stores.

The Representatives from both universities recently announced the partnership virtually via a Zoom meeting due to the COVID-19 pandemic.

According to the President of Cheyney University, Aaron A. Walton “To be able to share our experience and knowledge with this emerging African university and potentially help the people of Ghana develop a more accessible food supply is an extremely significant opportunity for us,” adding that “It’s a tribute to our academic success and it’s an honor.”

The Rector of Oboseke University of Excellence, Kwa David Whitaker on his side also said “Learning aquaculture can change the whole situation not only in Ghana, but we can share this knowledge with other universities and it could impact even a larger area of the core of Africa’’.

The establishment of Ghana’s campus as gathered was masterminded by Mr. Steven G. Hughes, a biology Professor and Director of Cheyney’s aquaculture laboratory, who led the conversations and planning for the university.

He noted that, “While our relationship with Cheyney will include more than aquaponics, this one area in itself has transformational potential,” he added.
He said via the conference that “We’re excited about the opportunity we have with Oboseke University,” added that “We’re going to help people in Ghana become more self-sufficient.”

The Wakanda One Obokese University of Excellence, a private Institution base at Asebu Kingdom in the Central Region was created in 2020 which operates at the intersection of e-commerce and will stress leadership, education, culture, history, technology, and tourism.

While OUE awaits accreditation, the institution will initially be an online digital platform with masterclasses, touring, event experiences, and remote learning through a relationship with Cape Coast Technical University.

Nana Obokese Ampah I, Founder and President of the Obokese Foundation, on his side, said the university offers an opportunity for people in the village to work on campus.

According to Nana Obokese Ampah I, “Our first goal is integrating the community into the economic opportunities. If they buy into the aquaponics model, we can potentially help them grow 12 times as much food on the same land’’.

Wakanda One Obokese University of Excellence is a 2019 Year of Return Legacy Project inspired by President Nana Akuffo Addo’s vision.

The school aimed to deliver a world-class curriculum and empower the next generation of entrepreneurs, builders, and servant leaders.