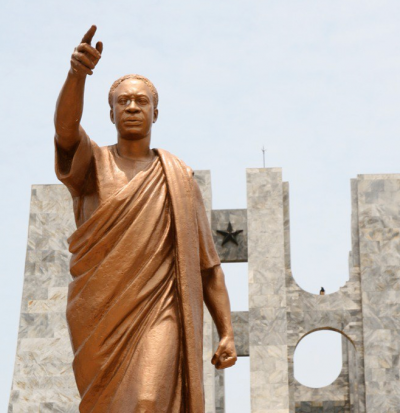 On the occassion of the birthday of Kwame Nkrumah, Nana Kwamina Kra II Provost Obokese University of Excellence has reminded Ghanaians of the need for the country to return to ideal Nkrumah preached.

Below is the statement

On May 23, 2020, when we made our very first announcement on establishing the first African Centered University in Ghana, we made a pledge to start our on-line course offerings on September 21, 2020 to honor what Osagyefo stood for.

However, following the massive response, endorsement and show of support for this historic project we have had to scale things up.

To keep up with the vision of Excellence, our team will continue to work towards meeting the standards and announce a new date for starting our digital offerings very soon.

We would like to use this opportunity to share with Ghanaians and Africans, in general, wherever they may find themselves what the Obokese University of Excellence is all about. As below:

WHY OBOKESE UNIVERSITY OF EXCELLENCE?

In retrospect, no one can deny the devastating impact of Germany’s Berlin Conference (1884-85) and its arrogant decision to apportion the African continent; invade, subdue and force its people into a European ethos, and, exploit its natural and human resources, all for uninterrupted advancement of European interests.

After nearly 75 years, Ghana was able to end Britain’s occupation, but, not before British rules, ideas, philosophy and psychology would diminish the Chieftaincy, discredit the cultural traditions and establish Europe’s political, judicial, financial, educational and myriad other social structures.

There can be no argument that four decades of British rule, manipulation and propaganda has transformed Ghana into its present day neocolonial appearance—that can be seen in its political structure, parliamentary procedures, judicial character and educational curricula. Ghana, as with all post-colonial Africa, is struggling to remove its European glasses and see itself for what it really is and decide what it really wants to become.

Present-day Ghana and Africa are true testaments to Carter G. Woodson’s famous quote: “If you can control a man’s thinking you do not have to worry about his action. When you determine what a man shall think you do not have to concern yourself about what he will do.

The necessity and process of European ‘mind control’ was warranted due to the fact that European’s found Africans to be highly developed, effective leaders with sophisticated social structures.

These characterizations are supported by the written conclusions of the 9th century Arab writer, Al Yaqubi, who described ancient Ghana as: “…one of the three most organized states in the region…Its rulers were renowned for their wealth in gold, the opulence of their courts, and their warrior-hunter skills…”

The completion of Step One marks the historic end to Ghanaian freedom. Despite what occurs thereafter the Ghanaian is no longer in control of ‘his’ own destiny.

Steps 2 and 3 are transitional and ultimately voluntary. Concepts of ‘freedom, independence and self-determination’ are nothing more than psychological fantasies and figments of the Ghanaian imagination that will never become reality.

How can I say this? The completion of Step Two implements the formal social infrastructure that, generation after generation, trains, instills and guides the formal development of the mind.

Schools, churches, political and other institutions provide the information, framework and rational narratives to support all of the concepts, knowledge, and formative training to support the conclusion that Europe (in Ghana’s case Britain) is the gold standard for everything.

Formal training provided by state funded schools and religious orders, in direct and indirect ways, teach that everything African is ‘inferior’ to everything European.

Students and adults subconsciously questions the folklore, protocols, and behavioral standards that developed them as they leave their villages for the modern cities and psychologically ‘distance’ themselves (out of a false sense of guilt/embarrassment) from the very villages, people and social systems that developed them.

No longer do they want to associate with their traditional ways, beliefs and practices, because, unbeknownst to them they have voluntarily embraced, the seduction, allure and invitation to become part of the ‘system.’ At this point the mind control is complete.

The system is working perfectly for the continued European benefit, albeit subtle and indirect. Moreover, the European that devised and implemented the system—for its exclusive benefit— need only maintain its’ creation with minor adjustments in ‘so-called’ leadership, whenever necessary.

Every problem is analyzed and conceptualized through this European lens. Every approach to solutions are based upon European models that have been reinforced through formal European schooling. Every social, political and economic model for progress, change and or advancement are, in fact, European at their foundation.

Enough said. With the firm establishment of the European consciousness we need only repeat Carter G. Woodson’s quote above to understand why he— the first Black Harvard University Ph.D. recipient would say that “…it took him ten years to get over his Harvard education.” Ghana experienced approximately 75 years of British occupation, rule and indoctrination.

By the end of these 4 generations it was Kwame Nkrumah’s experiences, in the context of the Black Civil Rights rhetoric, that fueled his aspirations for ‘independence.’

In March 1957 this very unlikely objective was achieved and, with it, came his vision of a Pan-African continent. Unfortunately for Nkrumah and others —which remains our central challenge today—was/is the understanding that molding a Pan-African existence, after 135 years of European indoctrination, is impossible without a sustained corrective cognitive-psychological transformation!

At present there is no Ghanaian/African institution designed to meet this need. At the end of the day, a PanAfrican existence is dependent upon a Pan-African consciousness!

OUE is designed and needed to commence, guide and sustain this ‘psychological sankofa’ and African restoration mission. Happy Anniversary.

This article was featured in the Ghana Web, Monday, 21 September 2020. Written by Dickson Boadi