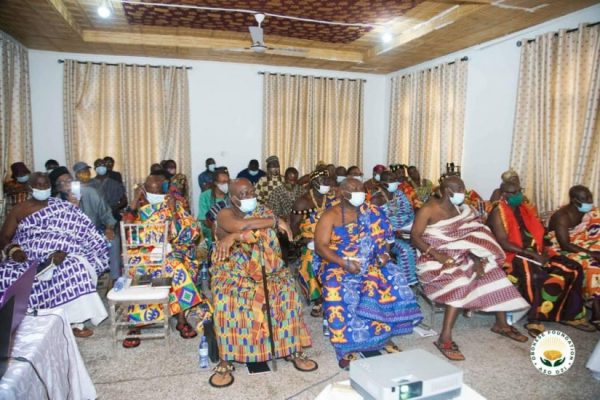 Cape Coast, Sept. 2, GNA – The Obokese Foundation has organised a day’s Chieftaincy Development Seminar for chiefs and traditional rulers from the Western and Central Regions at Cape Coast.

The seminar, which was on the theme: “Orientation, Rationale, African centredness and the concept of Aso-dzi/ Ubuntu” brought together 40 chiefs, including eight Paramount Chiefs.

It aimed to reorient the traditional rulers on the need to adopt African Centeredness approach and nurture thoughts to aid the development of their respective communities.

Speakers at the event included Ambassador Arikana Chihombori Quao, the Former Ambassador of the African Union to the United States of America, who is also the Founder and President of African Diaspora Development Institute (ADDI) and Nana Kobina Nketsia V, Paramount Chief of Esikadu.

Others were Dr Chike Akua, Dr Anthony Browder, Mr Kwane Boateng, a Co- Chairman of Beyond the Return – A Sequel to the Year of Return and Rabbi Kohain Halevi, Executive Director of PANAFEST Foundation.

Nana Obokese Ampah I, Apagyahen of Asebu Traditional Area and Founder of the Obokese University of Excellence, shared his vision for the University and appealed to the traditional leaders for support to bring it to fruition.

He said the project had come to make a statement to the rest of the World that Africans, both home and abroad, could solve their problems.

It is also to form a collaboration between prominent Africans in the Diaspora and Ghanaians to make the dream a reality.

Nana Kobina Nketsia called on Africans to embrace the ‘2019 Year of Return’ call by the President of Ghana, Nana Akufo-Addo to revive Africaness.

In response to Nana Kobina Nketsia’s call, Nana Kwamina Kra II, Tufuhen of Atonkwa-Elmina and Provost of the Obokese University of Excellence, said the University would continue to speak about the vision of the Year of Return.

Mr Akwasi Awuah Ababio, the Director of Diaspora Affairs at the Office of the President, encouraged Ghanaians to take a cue from the Obokese Foundation to make the most out of the Year of Return.

He said the government was ready to support any such initiative.

Mr Ibrahim Kwame Baidoo, the Executive Director of the Obokese Foundation, expressed gratitude to the participants and partners.